Past, Present, and Future: Evolving Technology in Logistics

People often use ‘the speed of light’ wrong but there’s no other way to describe how logistics has boomed in the last few years. Every new technology seems to be picked up, connected to the internet, and thrown into businesses before the average person knows what’s out there. So, since trying to predict the ‘next big thing’ in logistics, it’s probably easier to understand what gaps still need to be filled and what technologies could be up to the challenge.

In case it wasn’t clear in the last article, IoT and the cloud propelled themselves into logistics like a rocket. Seemingly out of nowhere, the industry went from responsive web applications to intricate device networks with infinitely more potential. This first revolution was all about process optimization which modernized supply chains into global, easy to manage ecosystems.

100% Connected through the Cloud

First and foremost, IoT networks provided mountains of data which was no longer limited to local servers. Instead of excel powered databases, companies collected and accessed data from anywhere in the world in real-time. The Internet of Things helped logistics companies develop some crazy powerful CMS systems that could locate, identify, and monitor every single asset in a company. Pretty great stuff but an upgraded CMS was only the beginning...

Companies like Picnic (a Dutch online supermarket) quickly rose in popularity thanks to the effective use of IoT and crystal clear services. Their web portal and mobile application show available stock, exact driver location, and travel times which are all easily connected but extremely well executed. Couple that with their great prices and Picnic took the market by storm, competing with some of the biggest stores in the Netherlands!

Inventory management is one of the biggest challenges which logistics companies faced. Thousands (sometimes millions) of products aren’t easy to track without technology on your side. Unsurprisingly, QR code scanners and RFID chips were among the first IoT technologies to be implemented. With them, logistics companies almost entirely automated their warehouses, making stocktaking and product sourcing faster with very little room for human error.

Something like this can appear to be a small change but efficient warehouse management has a butterfly effect on other aspects of logistics. Not only can companies dispatch products faster but they’re able to make informed decisions about re-ordering inventory using live-data.

Where are we now?

Process optimization is the natural phase 1 of emerging technologies while people rush to get immediate business value from them. However, once everyone’s figured that out, staying ahead of the curve takes some more creative, innovative thinking. So, phase 2 is where more broad, strategic developments float to the surface.

Unplanned downtime is a nightmare that can quickly escalate along supply chains. Luckily, a byproduct of widespread IoT technologies offers the perfect solution. What byproduct? Data and devices originally meant to monitor processes also give technicians everything they need to establish pre-emptive maintenance schedules.

When you’re insuring an entire fleet plus physical locations, insurance can take a hefty toll on monthly profits. Similar to the idea behind predictive maintenance, risk management is all about absolute proof that your company has taken the required steps to prevent accidents. Modern insurance companies are much more willing to reduce rates when they can see driver behavior or facility management devices in place.

This also works retrospectively (in the event of a claim). There’s no better way to show you’re not at fault when a mountain of data is behind your claim. Especially if you’ve managed to connect with devices like dashcams or fault detection sensors. 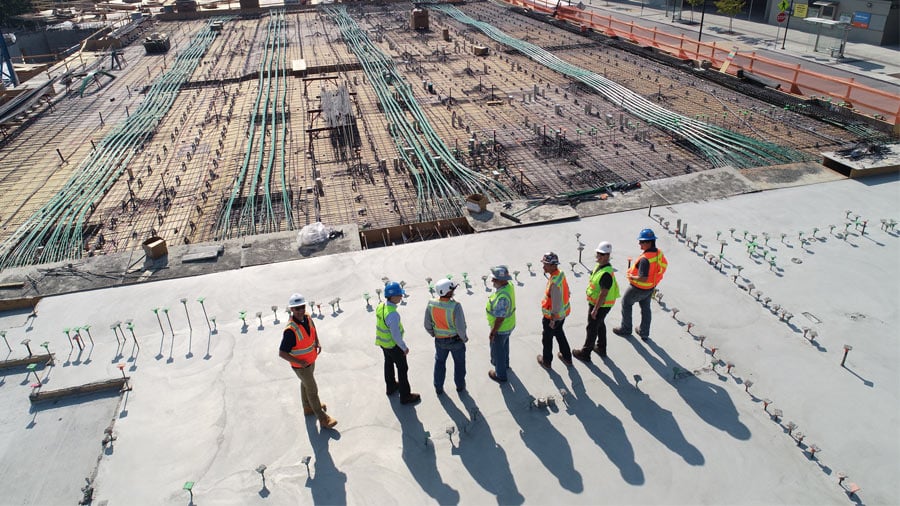 Thought IoT would slow down soon? Well… too bad! The 5th generation of mobile technology is around the corner, bringing faster data speeds than we’ve ever seen. Question is: what cool new toys are going to come from it? 5G is extremely promising for complex data processing in real-time which could offer the perfect solution for automated vehicles or drones. Whether they’re reality or just science fiction will be clear very soon!

The holy grail of logistics efficiency! Who needs to worry about driver scheduling, route planning, and fuel efficiency when you’ve got computers making data-driven decisions for you. Imagine the a fleet of vehicles that never sleeps, running through the night to move stock, stopping only for maintenance or refueling.

Hundreds of companies are currently chasing the automation dream but there’s a lot of work still to do. Chief among which is the software which has to make split-second decisions based on the vehicle’s surroundings. There’s also the ‘morality test’ to consider, answering difficult (very human) questions is something which machines just aren’t designed to do yet.

5G networks will go a long way to assisting the processing power requirements for self-driving vehicles though and I suspect we’ll see vast improvements shortly after it’s implementation.

Funnily enough, automated drones are significantly closer to becoming a reality than driverless vehicles. Hazards like other drivers, traffic jams, and obstacles are much less frequent in the sky and have accelerated testing by a handful of organizations. Using live telemetrics data, drones only need to navigate a straight path from point A to B significantly faster than any road vehicle could.

As a local package delivery system, we’re talking about packages going from warehouse to customer in minutes! Retail may be drooling over this but the impact for emergency services or humanitarian groups could be exponentially more important overall.

It’s not without teething problems though and the idea won’t see daylight until they’re fully resolved. First and foremost though is strict legislation around airways which is heavily monitored in certain countries. Another issue is simply getting a signature from customers without a physical person being present.

I’m going to end off with Blockchain because there’s a lot of potential but not much to back it up yet. Blockchain would enable near-perfect process monitoring to protect all involved parties but the security is highly dependant on implementation. Ideally, once an event occurs, neither party could overwrite the information captured until the next event. Perfect for making sure everything get’s where it’s supposed to right.

Prepare for the future with no-code!

The best part about this whole timeline? IoT is one of the easiest technologies to get behind since all the physical technology is readily available (and getting cheaper by the day). All you really need to do is develop the software to support those devices. With no-code platforms like Betty Blocks, you’re able to create the foundations, logic, and integrations 8x faster than hand-coding. So no matter what ‘phase’ you’re in now, you can accelerate into the next steps and beyond.

Get in touch with us today to book a personalized demo where we’ll show you exactly how no-code does IoT and more.

When imagining a legal professional at work, most of us picture a courtroom setting or spending countless hours compiling legal documentation and liaising with clients. Unfortunately, the latter represents a serious problem for the legal sector...

Application Platforms as a Service Prepare to Hit Mainstream IT

Research by CIO Dive showed that 56% of organizations intended to increase IT budgets for digital transformation, cloud-first strategies, and cybersecurity. Unfortunately, Covid-19 turned that optimism on its head. Budgets took a hit and the...

More often than not, budgets are tight. On top of that, the true value a new software project will deliver can be unclear, making it difficult for IT departments to effectively articulate and justify their budget requirements. This can lead to...