How Governments Get Unstuck from Outdated Legacy Systems

A couple of weeks ago, my grandpa showed me how to burn CDs. I said, “Wow, cool grandpa, I will try it out back home.” A little later, I walk out the door with Spotify Premium streaming through my smartphone. I applaud him for making the effort to keep up with the times and his dedication is wonderful. What’s also wonderful, is the way he sells it like it’s the invention of the century. If I didn’t know any better I would believe him with every fiber in my body.

This is what government innovation often looks like as well.

Make no mistake, government innovation is a hard game. When things are finally set in motion, society has already moved on. Apart from taking too long, these attempts end up far more expensive than anticipated.

Take government innovation in the Netherlands for example, where things went beyond absurd. Back in 2014, the Immigration and Naturalization Service started a project to digitize their processes. A smart decision, because by doing so they would work faster, more efficiently, and save serious money. The project was budgeted at 1.2 million euros and would be ready in the summer of 2015. But it’s 2019 now, the project isn’t done yet, and the cost has risen to a whopping 29 million (!) euros. 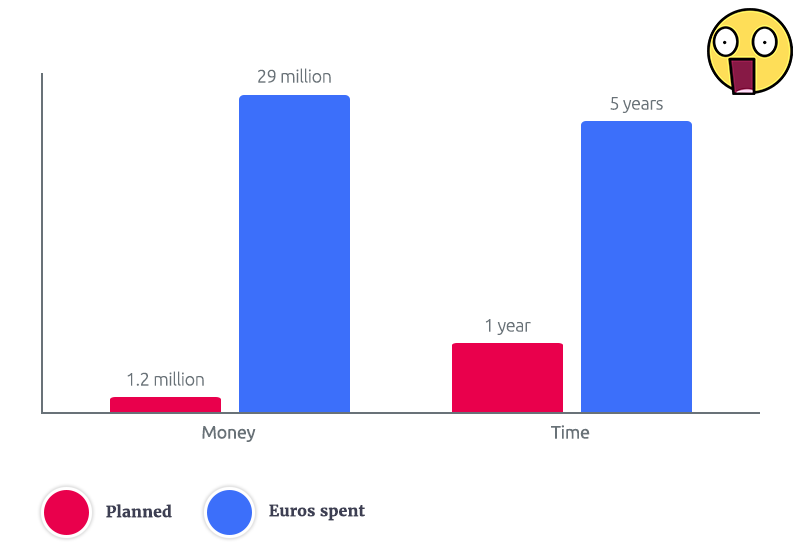 Let's put this into perspective
Imagine you hire a contractor for a new kitchen. The refurbishment costs 12,000 euros and should be done in 2 weeks. After a week you speak to the contractor and he says, "It will be slightly more expensive. The kitchen will cost 290,000 euros and we’ll need 8 months to get it done.” Completely absurd and unacceptable of course.

To be fair, governments themselves are not to blame. They want to move forward as well and serve society as best they can. There are just some things in place that hinder them from reaching their goals.

A mix of challenges to overcome

When it comes to digital transformation, most organizations focus on the technical part of the process. However, the human aspect is way more important. You can have the fastest Ferrari, but if you don’t know how to drive it’s just a shiny useless thing. So governments need to invest more in the civil servants who need to work with the new applications. Now they simply don’t have the right skills and knowledge to take full advantage of the new tools at their disposal.

Plus, the IT landscape within governments is extremely complex. The bureaucracy within this system and the associated politics makes processes extremely slow, and innovation is a fast game. Add to the table the difficulty legislation brings and you have a combination that has ‘trouble’ written all over it. To make matters even worse, governments usually have long-term contracts with IT suppliers who still live in the stone-age.

It takes no genius to realize that with all these factors in place, effective innovation within governments is near impossible. But, as with all good stories, there’s a happy end.

The city of Zaanstad saves €2.5 Million in four years by building their own solutions

This happy end comes from the city of Zaanstad in the Netherlands. With their innovative spirit, they will save 2.5 million euros in 4 years. How? By building their own custom applications. An impressive step forward, if you keep in mind that they were using their legacy GWS system for the last 25 years. Any time they wanted a change in their system, 300 other cities had to agree. Finding a place to eat for you and your friends is already a challenge, so you can imagine the impact this had.

With the control of innovation in their own hands, the city created the first version of a new youth services applications in just 10 days. Once live, the application increased administrative efficiency for youth care programs by 40%. This is just one example of the way the city of Zaanstad does innovation nowadays.

They’ve literally changed the way they think about digital transformation. “Now after seeing the success of our 7 Betty Blocks applications, we think this is quite a good way to replace more of our legacy systems. And we have more freedom to innovate by being able to develop new concepts and applications ourselves,” says Tom Uleman, Senior Information Manager for the city of Zaanstad.

Kickstarting your innovation is easier than you think

When you have been stuck to a legacy system for a long time like the city of Zaanstad was, it can be quite hard to imagine you can change things fast. But nowadays, even when you are heavily locked-in with a vendor you can still opt for new ways to innovate, like no-code development. Platforms like Betty Blocks integrate seamlessly with these systems and you can start small and grow on the platform, replacing the legacy system that’s holding you back step by step.

Want to know more about how a no-code platform can help you kickstart your innovation needs? Click the banner below.

When imagining a legal professional at work, most of us picture a courtroom setting or spending countless hours compiling legal documentation and liaising with clients. Unfortunately, the latter represents a serious problem for the legal sector...

Application Platforms as a Service Prepare to Hit Mainstream IT

Research by CIO Dive showed that 56% of organizations intended to increase IT budgets for digital transformation, cloud-first strategies, and cybersecurity. Unfortunately, Covid-19 turned that optimism on its head. Budgets took a hit and the...

More often than not, budgets are tight. On top of that, the true value a new software project will deliver can be unclear, making it difficult for IT departments to effectively articulate and justify their budget requirements. This can lead to...