2019 Market Outlook: No- and Low-Code Platforms

HpaPaaS. RAD. DPA. LCAP. OMG. WTF. Whatever you call them, there are no-code platforms and there are low-code platforms. They allow users to build different types of applications with limited coding or none at all, and they do so because software is eating the world. Demand is explosive, and developers are a hot commodity whose time is precious.

The low-code application platform vendor landscape is a jungle and you need a good pair of binoculars and maybe some bear mace to navigate it. So hop on the safari jeep and let us be your guide.

Crash course in rapid development (welcome to the jungle)

High-productivity application platforms as a service, rapid application development platforms, or digital process automation platforms (whew) all tend to approach the developer shortage problem in 2 ways: either by freeing up more time for developers by reducing the amount of code they have to generate (and cutting development time drastically), or by creating a whole new class of developers by removing the need for programming knowledge all together. We call these Citizen Developers, because they often don’t have professional coding knowledge.

Forrester segments the no- and low-code market into 4 categories based on the intended user base (you can read more in a February 2019 blog post by VP Principal Analysts Rob Koplowitz and John Rymer, ‘The Four Faces of Rapid Development’). With or without tools, there are just not enough resources for IT departments to accommodate today’s demand for developers. So in their product evaluations, Forrester makes a distinction between business developers and professional developers.

Experts agree that the focus of business developers is to solve a business problem rather than get into the technical infrastructure like a pro developer does while building applications. And that means that these two populations have totally different requirements for the platforms they use. A pro developer for example is going to want the right tool that seamlessly integrates with the rest of his or her DevOps chain, with an engineering approach over visual development.

With Citizen Developers though, the goal is to put the finished code into their hands as fast as possible, so the emphasis is on visual development.

Different developers want different experiences (and if you want mobile apps that’s an even different story), and today’s market-leading platforms reflect that.

Who uses a no-code platform?

At Betty Blocks, we see our platform as much more than just the platform itself. It’s a means to become more innovative on a high level. Unlike so-called restrictive no-code platforms with limited functionality, Betty Blocks supports Citizen Developers on a journey to become capable of more than just cranking out low-impact applications on a limited platform.

It’s about creating a platform that educates and promotes growth while also facilitating fast and easy development with a low barrier to entry. Citizen Developers should focus on things like features rather than source code, so that they can impact the business directly with their industry-specific knowledge.

Leaders of the pack

Citizen Development certainly isn’t new (think power users and Access wizards), but what’s different in 2019 are the available tools. And what they’re capable of.

But it’s not only about the platform. It’s about creating a network of Citizen Developers who are doing important work.

It’s about providing resources and support.

And it’s about education to pull it all together and set every Citizen Developer up for success.

Your place in the no- and low-code market

We see the low- and no-code landscape like this: 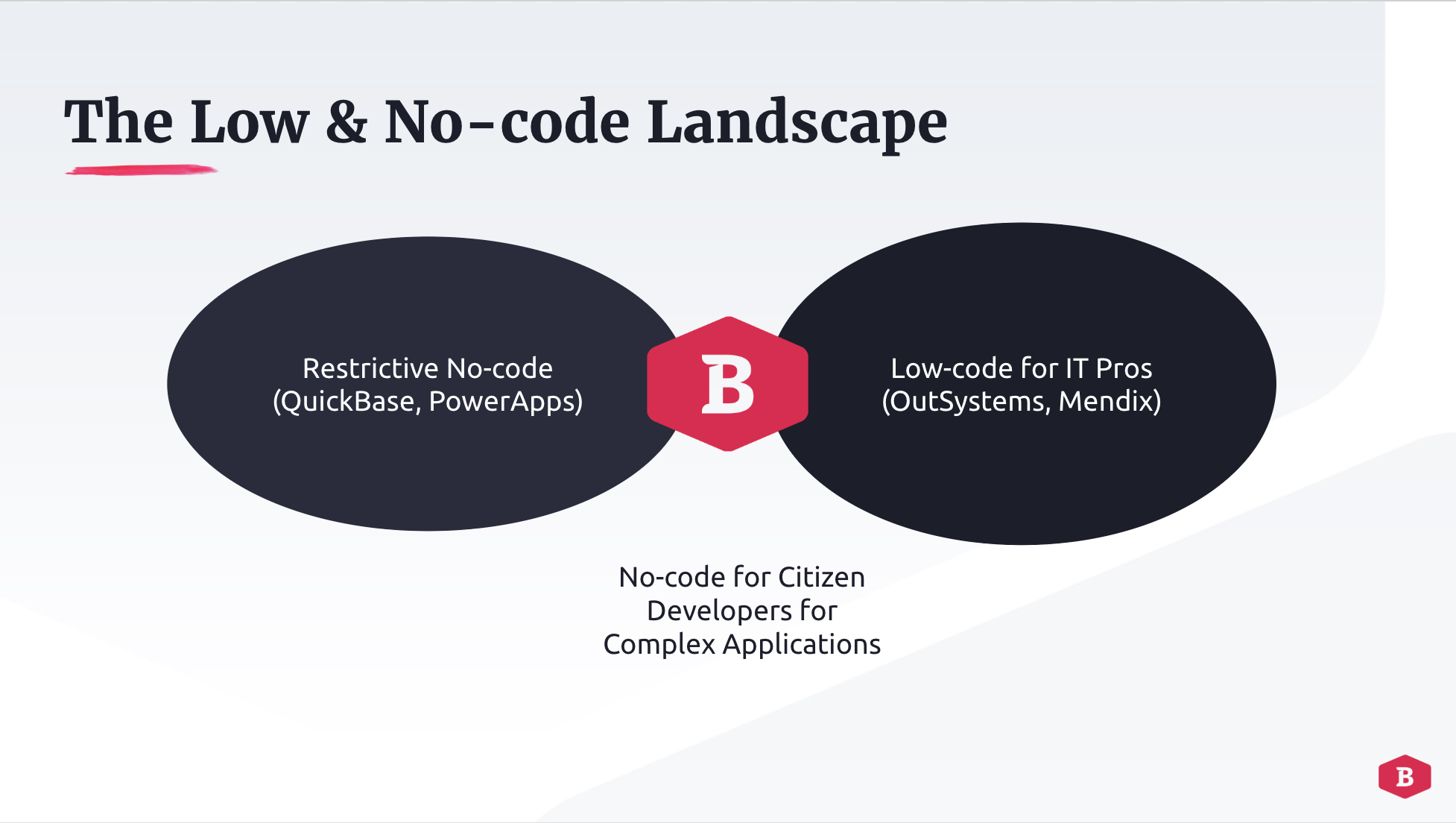 You've got no-code platforms with limitations in terms of the kinds of applications they're able to produce. You've got low-code platforms geared towards IT pros because there still is quite a bit of code that needs to be written. And then there are platforms that empower citizen developers to create complex applications.

The key to navigating the playing field is knowing your focus and your needs, and determining which class of platforms (and which vendors) best reflect that. You’ve got options whether you’re looking for wide or deep deployment options, and whether you want a quick workaround for your pro developers or to build a culture of Citizen Developers within your organization.

Want to see how the Betty Blocks platform can benefit your innovation process?