How the 1990s Shaped the Modern Technology Landscape

Two things in life are certain: death and clapping like a maniac when the F.R.I.E.N.D.S intro song plays. Yes nobody told us life was gonna be this way but damn we had it good in the 90s. Between MTV, the internet, and global TV stations, the pop-culture we loved spread like absolute wildfire. Whether you rocked out to Nirvana, collected beanie babies or blasted Dr. Dre on your boombox, you knew you weren’t alone in your choices.

Since the internet is the instigator of this multiculturalism, let’s start off our 90s tech roundup there!

Before the 90s, many people had tried unsuccessfully to create a ‘World Wide Web’. Whether they failed because of security breaches, limited funding or complexity, the bottom line was that you’d need a genius to make it work. Good thing Tim Berners-Lee was on the case.

What made his attempt different? Berners-Lee had already designed a prototype system named ENQUIRE for CERN (yes, the large hadron collider guys!). ENQUIRE already functioned like the internet but for CERN’s internal network of 10 000 computers. However, working on a private network is easy, so Berners-Lee needed one more ingredient to make his system global.

Long story short, that ingredient was HTTP (Hypertext Transfer Protocols) which he created in just 3 months! With that in hand, Tim Berners-Lee had everything he needed to officially launch the first truly global, accessible network in the world.

Next time you open your 20th internet tab, like your aunties post on Facebook or access a Betty Blocks application in the cloud, say a little thanks to Tim Berners-Lee. One particular piece of software in the 90s might not have been born on the internet but it thrived because of it.

There are 2 things a successful operating system needed in the 90s: a great user experience and an adorable mascot. The Linux OS, created by Linus Torvald, perfected both by taking a totally different approach to what the competition was doing. How? By ditching the annoying Clippy for their penguin mascot named Tux and by going open-sourced.

We’re very familiar with open-sourced software in 2020 but back then this was an extremely bold move. The Linux Kernel itself was the piece that a user downloaded, similar to a blank canvas with just enough code to get started. From there, users could program literally anything they wanted into their operating system. Sounds perfect for experienced coders but what about the average Joe? 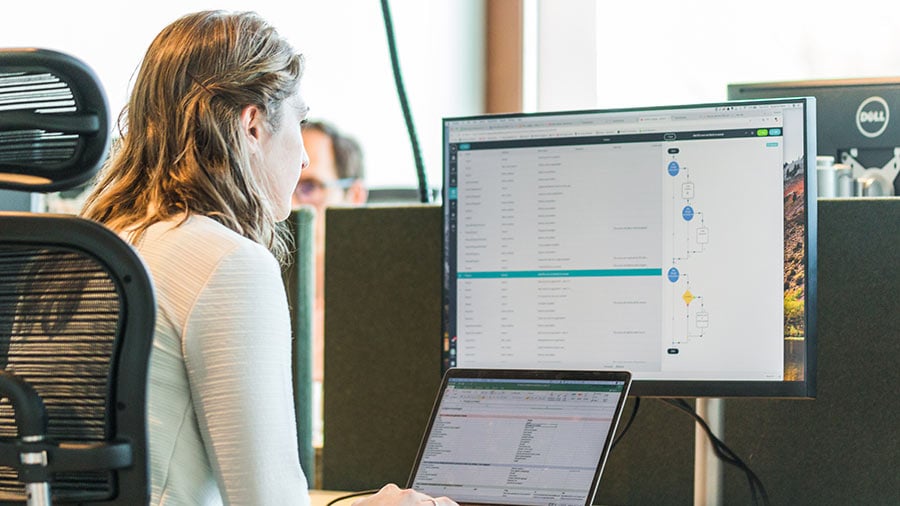 Thanks to the freshly created internet, online Linux communities sprang up to publish libraries of fully coded modules. If you knew where to look, even a novice could join these communities to help fully customize their own home computer.

Alright, that’s cool and all but what does Linux do for us now? Ahem:

It’s a weird comparison but Linux really was continued proof that the DIY culture created by CD’s and personal media was the way forward. The more people that tried interesting, innovative things with Linux, the faster the community grew overall. That community effort is the driving force behind Microsoft and Betty Blocks’ mission to continue democratizing application development.

Still, a Linux based cloud on its own isn’t going to get us all the way there. We need power, processing power and lots of it!

Now that everyone and their grandma had at least some working knowledge about computers, ‘standardized’ or proprietary hardware began falling out of fashion. People wanted to know that their computer was powered by the best stuff available.

We could joke all day about them but adverts like these turned computer hardware into a massively competitive market. Just like any other industry, competition accelerates advancement 10x faster than before. We named Pentium here partly because of their campaign but mainly because of how they became THE household, business, and professional name within just a few years.

You could bet that nearly every ugly grey computer tower (you know the ones) was running a Pentium back in the day. Whether you used yours to surf the internet, play Doom or compile thousands of lines of code, Intel could do it best.

Ideal for blind programmers, because they can’t C…

Jokes aside, Java needs absolutely no introduction. As a programming language, its “Build Once, Run Anywhere” design made it the weapon of choice for cross-platform, multi-channel, and database software around the world. Choosing to go object-oriented in its design, it also made legacy code quite a bit easier to handle further down the line.

Today Java has some really tough competition (with Ruby and Python) and it’s a language that you either love or love to hate.

While we’re in the 90s, let’s talk about the most important thing for any company at the time. Java’s mascot: Duke. A character designed by Joe Palrang who would later design familiar Dreamworks characters like Shrek. Send us a message if you know what Duke is actually supposed to be because we have no idea!

Wifi for us is a kind of middle ground when we talk about technological advancement but it does deserve an honorable mention. Essentially, Wifi has created the most complete, connected network of computers that has ever existed. From anywhere, at any time, you can access a world of information from whatever device you happen to be carrying at the time.

For business purposes or organizational processes on the move, this is perfect. For your average, everyday human interactions, it can get in the way. We’ll have to see how it shapes up in the coming years.

Think about any technology you regularly interact with, it’s almost guaranteed that one of these innovations is what made it possible. That might sound like an easy thing to say when the internet is included here but these are all still going extremely strong after 30 years.

The 1990s laid the foundations for just about every ingredient that makes our no-code platform tick.

Join our No-Code Now! event on March 18 & 19 to discover exactly no-code draws inspiration from the 90s and the greatest minds of computing history. From presentations by industry-leading researchers like Jeffrey Hammond of Forrester research to a full day of hands-on workshops, you’ll learn exactly why no-code has made its way into the hands of professional developers around the world.

Mazars, an innovation frontrunner, is an internationally integrated partnership operating in 90+ countries and specializing in audit, accountancy, advisory, tax, and legal services. One of the biggest Mazars member firms, Mazars in Germany, has...