How the 1980s Shaped the Modern Technology Landscape

By the time the 1980s arrived, everyone had climbed out of their VW minibusses right into - what was then considered to be - a new age of high fashion. The wide-leg jeans, ponchos, feathers, and beads made way for spandex, shoulder pads, leg-warmers, neon colors, and perms, perms, and more perms…

No matter what technology we talk about in today’s article, you’re probably only going to remember the 80s for the eccentric fashion and even crazier hairstyles. Still, we are going to show you the other side of a decade that did some amazing things for technology, and even paved the way for what now is known as citizen development!

1982 - The best selling computer in history

Honestly, we don’t need to remind you of the Commodore 64, but we’re going to anyway. Why? Because it might actually be the thing that started Betty Blocks. You see, co-founders Chris and Tim Obdam, like so many others, began their journey with one of these bad boys. 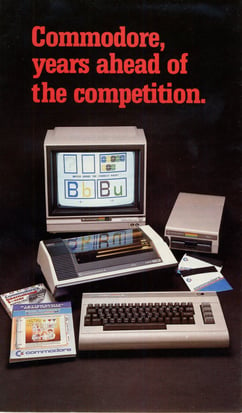 The amazing thing about the Commodore 64 was that it didn’t come with all the bells and whistles that competitors included in their models. Instead, Commodore International took the home computer market by storm with the most reliable, user-friendly option around. Namely, it used your home TV as a display and could be expanded with attachments like a mouse or even a printer. At a time when most people still didn’t really know how to use computers, it was a genius move which put 17 million of these into homes around the world.

However, there was one element that the Commodore got very, very wrong. Unfortunately, the company chose to stick with a cartridge-based design and completely missed the floppy disks/CD train which was gaining popularity among manufacturers and end-users.

It turned out that Microsoft had not only jumped on the train but had also arrived at the next station with its new operating system.

MS-DOS (Microsoft’s Disk Operating System) is exactly what you would expect from a young Microsoft product. With early Microsoft, we’re of course talking about an eager, innovative, company that wasn’t afraid to make mistakes along the way. MS-DOS just happens to capture that energy perfectly.

DOS was far ahead of its time by fully embracing the disk format in a lightweight, high performance operating system. By the late 80s, MS-DOS would even grow into THE leading OS for the business world. So where’s the mistake?

Microsoft made some really weird decisions with the first version of DOS which prevented it from reaching the home computer market. There was no mouse support, no graphical user interface, and it lacked features for the average Joe. In essence, MS-DOS was all work and no play without any real user-experience to speak of.

We absolutely love what happened next though. Rather than creating a whole new product, Microsoft iterated on what they already had to make DOS a truly universal OS within just a few versions. Here at Betty Blocks, we’ve made sure that anyone in an organization can take part in iterative development to not only tailor applications but get there even faster than Microsoft could!

Why on earth are we talking about CDs in our technology timeline? Of course, Microsoft believed in them enough to create a whole OS but there’s something far more important happening here. A movement that started at cassette tapes, VHS, and eventually CDs had sparked a whole new way of thinking.

Think about your first mixtape that landed you a date in college, your personal movie collection or the jams that kept you sane on long road trips. CDs let people take full control just about everything they wanted from entertainment or media at large. Quite literally, CDs let you be a citizen… anything!

The upside? Unlimited possibilities to customize the world around you or for sharing your home-brewed software. The downside? Sometimes not everything shared was good like Robert Morris’ little creation.

One of the most disruptive ‘attacks’ on the internet was never meant to cause any trouble at all. Actually, the Morris Worm was meant to do the exact opposite. 23-year old Robert Morris, son of an NSA computer scientist, simply wanted to highlight vulnerabilities of the still-developing internet. To do so, he created a tiny virus that would exploit well-known cracks in the internet to replicate itself. The problem? It worked a little too well.

All it took was a single floppy disk and a campus computer for the Morris Worm to disrupt services around the world for several days, causing an estimated 10 million USD in damages! Imagine being an NSA agent being told your son had inadvertently brought thousands of computers to a standstill?

Ultimately, the Morris Worm came full circle in its purpose by teaching governments and software developers exactly how far computer hobbyism had come. If one person could wreak havoc without even trying, then many more could do the same. It’s here that security guidelines, best practices, and anti-virus tooling (some of which are still in use today) were established.

A wild ride to be remembered

Technology in the 80s feels exactly like the fashion trends of the time. Everyone was doing what they thought was best but there was the occasional weirdness that spread throughout the decade. Does that mean the 80s are less relevant to the growth of no-code? Funnily enough, the weirdness is our favorite part, and if you aren’t turning a couple of heads along the way, then you’re not doing things differently enough.

Join our No-Code Now! event on March 18 & 19 to discover exactly no-code draws inspiration from the 80s and the greatest minds of computing history. From presentations by industry-leading researchers like Jeffrey Hammond of Forrester research to a full day of hands-on workshops, you’ll learn exactly why no-code has made its way into the hands of professional developers around the world.

The Naked Lawyer: 2023? Keep Pedalling! Stick to the Facts

2023 has started, and this year Chrissie Lightfoot, aka #TheNakedLawyer, is forgetting about trends and predictions, and sticking to the facts.

The Naked Lawyer: Winter HAS Come! How to Power Through the Recession?

Winter is here, the UK is entering a recession, layoffs and hiring freezes are on the rise, and the legal industry is bracing itself.